First and foremost, a disclaimer: As Bis/Pans we know the problem with defining our sexuality as a binary. Many, if not most, of us are attracted not only to cis women and men but also to all of the other beauty and sexuality throughout the gender identity continuum. However, for purposes of discussing the privilege that exists for those who are only attracted to one gender I am going to be using some language that does not really define us but is useful when discussing the power/privilege of monosexuals (straight and gay) and results in phobia toward Bis/Pans.

As I have discussed before, I embrace my Pan siblings but I will be using Bisexual to define those of us attracted to people of more than one gender. I will be using Monosexual for those attracted to people of one gender (usually, but not always, cis women and men). I also want to make clear that I am well aware that privilege is most definitely not equal between straight and gay identified persons.

As Bis we definitely experience biphobia from both straight and gay monosexuals. There is a degree of difference but when you are on the receiving end it feels pretty much the same.

So, on to the privilege as I see it and what that privilege confers.

This is hardly a comprehensive list but it does try to address the struggles of being Bi in society. For the reasons above and many others there is much less of a cohesive Bi community where Bis can seek refuge and support. In addition, because we often feel unwelcome in the greater LGBT community it is much more difficult for us to connect and organize.

It is so frustrating that often monosexuals are not even aware of the privilege they have that Bis do not share.

My intention here is to share information that may empower Bis to call out privilege when they see it and demand acceptance and understanding from both the LGBT and straight communities.

We are valid. We are worthy. We should not be invisible and we must demand respect and inclusion. We know who we are and we need to express that. If we call out the assumptions we are moving toward a situation where we are accepted and embraced. We are, after all, the Queer Majority. : ) 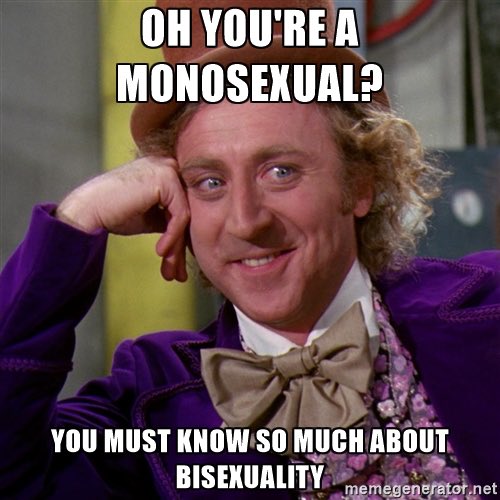