I went out to a LGBT film festival in my community last night. It had been a while since I attended such an event. It felt good to be there. I felt comfortable….at first. We all know that the B in the LGBT community is not always fully represented but I was keeping a positive attitude that these ‘Women’s Shorts’, short independent LGBT films by women might possibly make me feel included. I was wrong.

I am not saying the films were bad….in fact, they were much more inclusive than they had been the last time I had attended several years ago (yes, time flies and I don’t always do the things I would like to do). There were more woman of color represented and maybe a few non binary folx but Bi women, oh hell no….It was a pretty deep disappointment to me.

I had attended with my future daughter-in-law (DIL) and her friend, who is a lesbian. The evening had been OK. I was not thrilled by the fact that Bisexuals were not represented at all but, by and large, I was glad I had gotten out of the house (I am on a mission to be more social) and seen the work, American and International, by women directors. I had definitely had a few laughs during the animated film about female masturbation and was intrigued by the film focusing on the Latinx community….but, then it happened, my DIL’s friend saw someone she knew and said it was great to be in a room filled with only lesbians. I mean, I was sitting right next to her, she knows my sons (and my daughter), we had just discussed my husband’s culinary skills, given our past conversations she knows I am Bi and I was RIGHT THERE. This is exactly the kind of erasure I remember from decades ago….but I am an elder now and not one to hold my tongue. I simply said, ‘oh, all lesbians in here, did you not notice the Bi woman sitting right next to you?’ Her response, ‘I meant almost all lesbians’. I was not done. ‘You know everyone in here?’. Her: ‘uhhh, no….I mean, I just assumed’. Exactly.

The bottom line is that the night, although infuriating in its Bi erasure, was not a total loss. Prior to the films, a volunteer made a plea for more volunteers, as they make sure the film festival runs smoothly. Yours truly plans to volunteer and make her voice heard…maybe next year there will be even more diversity represented at the lgBT film festival. ; ) 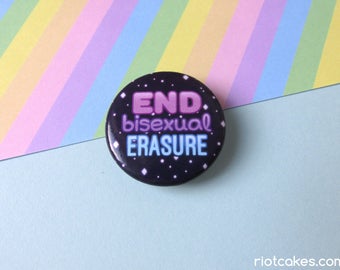