When I read this definition of biphobia I wondered just where this dislike and/or prejudice against bisexual people was coming from. Typically, it seems to me that biphobia, at it’s most visceral, comes from fear….either fear of other or fear of self. People either fear what they don’t know or fear they are what they dislike.

Fear is a feeling induced from a perceived danger or threat. Bisexual people are neither of those things. Biphobia has no basis in fact, though, but rather is based on erroneous perceptions of our Bi community. These perceptions that Bisexuals are promiscuous or dishonest are no more correct about our community than it is of monosexuals but they do persist.

So, what do we do about this? What do we say when we are confronted by biphobia? I have a few ideas. Well, full disclosure, they are not mine. I must credit Reddit (bunnylover72626F you are my spirit animal) but they were so funny I felt they needed a new life. Hopefully, a few laughs will help us maintain our composure and our sense of humor when we deal with the inevitable biphobia. 😀 So hold your head up. Be who you are and laugh out loud at the haters. Pay them no mind. They don’t deserve your precious time.

submitted 2 years ago * by bunnylover72626F Bisexual/Biromantic, married to a bi guy

Because the only response that stupid nonsense deserves is more nonsense…

[Bi-negative Nancy]: So which do you like better? Straight sex or lesbian sex?

[Bi-negative Nancy]: But they’re both sex

[Bi woman]: But they’re both fruit

[Bi-negative Nancy]: Two girls making out is hot, but I could never get into watching two guys…

[Bisexual]: (interrupts them) Not with that attitude you can’t! 😀

[Bisexual]: (raise your eyebrows and give them a flirty look) Oh really? Are you willing to back that statement up? (lick your lips and look seductively into their eyes)

[Bisexual]: Yeah, multivariable calculus is confusing as hell. So’s the political situation in the Middle East, and quantum mechanics and…

[not recommended alternate response]: Yeah, I’m really confused as to how someone could possibly be as stupid as you. Did your mom drop you on your head as a kid or something?

[Bi-negative Nancy]: Yeah, but which are you really?

[Bi-negative Nancy]: Bisexuals will sleep with anybody

[Bisexual]: (laugh really hard then shout loud enough that everyone nearby can hear) I WOULDN’T SLEEP WITH YOU IF YOU WERE THE LAST PERSON ON EARTH! (point and continue laughing loudly)

[Confused person]: Pansexual? So you have a thing for cookware?

[Pansexual]: (whips out a frying pan) Aw yeah, baby! I love me some sexy cookware…

[Bi-negative Nancy]: Bisexuality is just a stepping stone to coming out as gay

[Bisexual]: Like how heterosexuality is just a stepping stone to coming out as bi? I identified as “heterosexual” (in air quotes) before I came out as bi too (smile and nod)

[Bi-negative Nancy]: Bisexuals aren’t real- they’re just gay people who are too scared to come all the way out of the closet

[Bisexual]: Heterosexuals aren’t real- they’re just bi people who are too scared to come out of the closet

[Bi-negative Nancy]: Bisexuality means you have to like both equally

[Bisexual]: Yes, and bilingual people must speak both languages equally. And for a bill to be bipartisan it must have exactly equal support from Republicans and Democrats. And bipolar people must spend exactly equal times in manic and depressive states. And bi-color corn is exactly 50% yellow kernels and 50% white kernels. And… (If you feel like educating someone, this is where you show them the Robyn Ochs definition of bisexuality… and/or where you tell them that “both” isn’t really accurate because there are more than two genders.)

[Bisexual]: We can’t call jellyfish jellyfish- I slathered peanut butter on one once and took a bite and it was horrendous!

[Bi-negative Nancy]: I’ve only seen you with men, so you must be straight/gay!

[Bisexual]: And I’ve only seen you alone, so you must be asexual

[Confused person]: So how do you know if you’re… you know… a pitcher or a catcher?

[Confused person]: How do you know you like both if you haven’t been with both?

[Bisexual]: How do you know you don’t like both if you haven’t been with both? (raises an eyebrow) You never know unless you try… 😉

[Bisexual]: HOW DID YOU FIND OUT ABOUT THE DOOMSDAY DEVICE?! I THOUGHT MY SECRET LABORATORY WAS WELL HIDDEN! (be sure to visibly panic)

Bisexual: Yup! (steal their stuff and run off)

[Bi-negative Nancy]: Sorry, I just couldn’t ever date a bisexual

[Bisexual]: Sorry, I couldn’t ever date someone so closed minded

[Bisexual]: No. To rebel, I’m organizing a multisexual militia to orchestrate a military takeover of a U.S. state, then secede from the union and make a bisexual utopia. Which sounds the best? BI-daho, O-BI-o, or Rhode BI-sland? (for the pan people- “How does Indi-PAN-a sound?”)

[alternate response]: No. I’m doing this to rebel (punch the person, throw a brick through a window and set the building on fire)

[Bi-negative Nancy]: I’m a gold-star lesbian, and I don’t want to go anywhere a dick has been

[Confused straight woman]: I kissed a girl once in college so I totally understand

[Bi woman]: Kissed her where?

[Straight woman]: (smugly) On the lips

[alternate response]: I may be bisexual, but your macho jock dumbassapian mentality who thinks two girls kissing is “cool” is surprisingly a turn-off (credit to your ecards)

[Bisexual]: Actually, I’m a little BI-FURIOUS! (roar and flip a large piece of furniture over)

[Confused gay guy]: Yeah, when I first came out I identified as “bisexual” (in airquotes) too.

[Bi guy]: Yeah, and you’re only kind of a “giant asshole” (in airquotes) but I’m sure it’s “just a phase” for you too

[Bi woman]: Really? Because I go for months at a time without getting laid. I must be doing it wrong…

[Bisexual]: Yeah, that’s why I cower in the closet in fear around half the people I know. Ya know. For attention

[alternate response]: Nah, if I wanted attention I’d do this (Start some music, bust a move and become a Youtube sensation)

[Religious Bi-negative Nancy]: But it’s against God’s word- God made Adam and Eve…

[Bisexual]: (cuts them off) Yeah, God said Adam and Eve, so I did them both! I mean, it’s called the BI-ble, not the STRAIGHT-ble. Duh

[Bi-negative Nancy]: Bi people can never be happy in a monogamous relationship

[Bisexual]: Judging by the rates of cheating and divorce, straight people obviously can’t either

[Confused person]: So how does lesbian sex work?

[Bisexual]: Yeah, and some people believe vaccines cause autism (or insert something else here) but it doesn’t mean that they’re right

[Bi-negative Nancy]: I think someone who says they’re bi is hiding something

[Bisexual]: Yes. We are hiding many things. The secret to eternal life. The location of Area 51. The Krabby Patty secret formula. All of it. (credit to helloimbritishletshaveateaparty on Tumblr)

[Super nosy person]: How far have you been with a guy and a girl?

[Bisexual]: Well, I’ve traveled with some friends of different genders… so pretty far I guess. (credit to caffeinatedfossil on Tumblr)

[Pan-negative Nancy]: Pansexuals are just bisexuals who want to be special snowflakes

[Pansexual]: (Laugh) Please. Like I need any help being this awesome 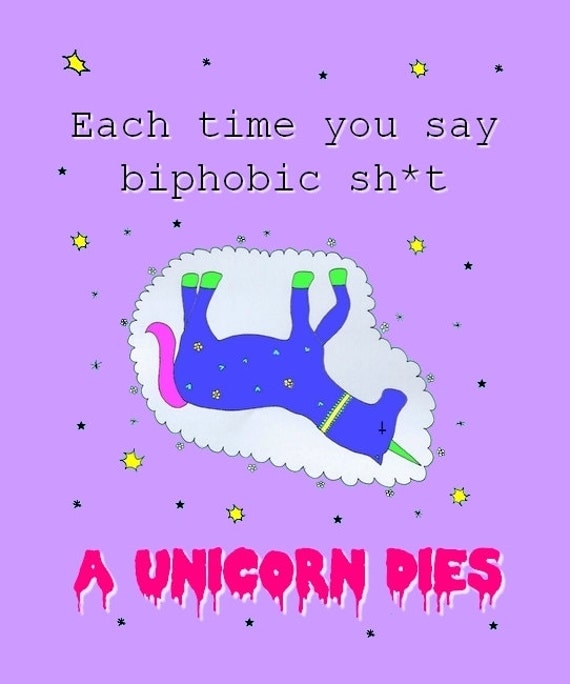