Bisexuals have always been around; and so has bierasure.

Bisexuality was oft the norm in Ancient Greece, at least for men. In Homer’s Iliad, Achilles had relationships with men and women. One of his relationships was with his sparring partner, Patroclus, and this would not have been considered unusual by the Ancient Greeks. Bi relations were considered fine, but only between men, preferably an older and much younger man…or even two swans if you know the story of Zues and Ganymede. This was ‘mythology’ after all.  The point is the the mythology was Bi inclusive. Now, typically the young men having the relationships with their ‘mentors’ were expected to go on and marry women and father children. However, at that point, they were also likely to have younger male lovers so it is not as though their bisexuality was considered a phase.

In Ancient Rome, it was expected and accepted that a freeborn Roman man could and would have sex with both men and women as long as he retained the ‘penetrative’ role. (Editorial note: Right. Of course. Ugh) The behavior also hinged on social standing and outside of marriage a man was only supposed to engage in sexual congress with someone of a lower class (the gender of the partner did not matter but it was considered in appropriate to engage in sex with another freeborn Roman man or his wife or children)

In Ancient Japan, a similar type of relationship was involved in samurai training with the older, experienced samurai tutoring a younger man in honor and battle but, it was also expected that student would become the older man’s lover. This practice was called shudo, and was expected to result in a lifelong and deep ‘friendship’. The sexual aspect of the arrangement was expected to end when the student married a woman and started a family. Bisexuality (once again for men only) was more the norm than homosexuality which was taboo. 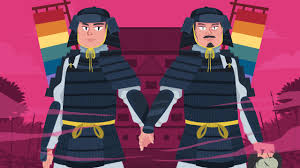 In Native American culture ‘two spirit’ people indicate the idea of bisexuality was present. The androgyny of the Two Spirit was considered sacred. Two Spirit people were treated with great respect and had same and opposite or other sex relationships. This seeming bisexual utopia was put to an end when the Spanish conquistadors arrived and considered the behavior immoral.

Obviously, I need to read much more about this subject. I only include this brief information, based upon very cursory reading,  to make the point that bisexuality is hardly a modern phenomenon. The information I have found thus far is not inclusive as far as female sexuality is concerned  except for the Native American tradition. That does not mean that female bisexuality did not exist in antiquity but rather that there may not be as much recorded information about it.

Stay tuned for more on this subject with more of a focus on specific historical figures who were Bi and their legacy for those of us who identify as Bisexual today.