Bisexuals have long been negated, diminished, disrespected and marginalized. This biphobia has been directed at Bisexuals by both the heterosexual and homosexual communities. In fact, the biphobia is so extreme that monosexuals have attempted to deny our very existence. I think many activists believe this extreme biphobia and bierasure arises from fear of who we are and how we are.

Truly, rather than enforce the Binary we threaten it. When we threaten the basis for homosexuality and heterosexuality it appears that monosexuals get very fragile and fearful. A heirarchical structure, which is the basis for monosexuality, is threated by Bisexuals who are attracted to their own and other genders and for whom the binary really does not compute.

The Binary enforces oppression of marginalized identities. It allows a differentiation between groups which the sexual and gender fluidity of many bisexuals does not allow. Most Bisexuals are romantically/sexually attracted to individuals along the gender continuum. Our very existence threatens the monosexist world view. Monosexuality enforces the idea that there are two separate and contradictory sexualities: heterosexuality and homosexuality.  These two sexualities support the idea that you are attracted to your own or an opposite gender. Bisexuals blast that worldview out of the water.

Instead of buying into this either/or mentality Bisexuals view it as a situation where why not both or why not all….we are not threatened by the idea of accepting our own sexual/gender fluidity and that of others. There is a more equal opportunity aspect to Bisexuality which monosexuality does not have.

While we have a long way to go it does seem we are on the cusp of the visibility and representation some of us have been waiting on for decades. We need to make sure that we retain our rebellious nature and our ability to see beyond sexual and gender norms in order to create a new landscape which is inclusive rather than divisive. Bisexuals have a natural affinity to question the way things are, to live outside societal norms, to be willing to beauty and sensuality regardless of gender identity/expression. As we are strive to be better represented in media and in culture we want to have a care and do not lose that magical gift. 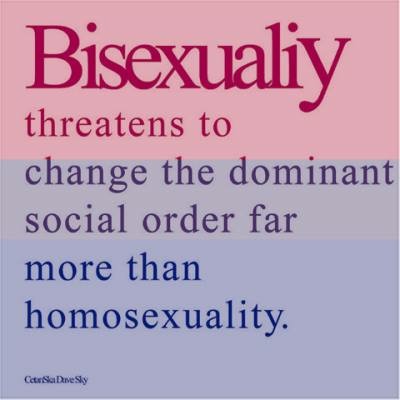