Talk about a clickbait title for the blog. There is no real secret about Bi women. We are living, breathing human beings who just have the capability to be attracted, sexually or romantically, to folx of multiple genders.

I would like to use this moment to bust the stereotypes about Bi+ woman and how we express our sexuality.

We are genuinely and ecstatically attracted to other women.  The idea that we will use our sexuality in an ‘ironic’ or ‘deceptive’ way to seduce women, not for our own pleasure, but to make us more attractive to men is absurd. There may be men we are attracted to and want to do sex with but our attraction to and desire for women is totally separate from that. This is a myth/stereotype I truly want to demolish and burn to the ground. Bi+ women are woman-loving-woman. If we have had sex with women we know how transcendently satisfying that is and I can guarantee we are not fantasizing about dick when we are going down on pussy. We are doing sex with women cuz it turns us on, and because we want to return the favor. It is really and truly as simple as that. Our sexuality is not a circus side-show for the entertainment of straight men, period!

Another deeply offensive stereotype is that we are going through a phase and that phase will end when we find the ‘right man’. Not only is this stereotype misogynistic and androcentric but it also perpetuates the idea that the moment we find the magic penis we will drop our momentary attraction to women and follow a man to the ends of the earth due to our inability to resist their masculine appeal. Wrong! Just so wrong! While Bi+ women may more often be in ‘straight appearing’ relationships this is much more likely to be due to the fact that Lesbians are less likely to date Bi+ women than that we are not authentically attracted to women.

Oh right. We’re cheaters. In some ways, I don’t want to dignify this with any response. However, bisexuals are no more likely to cheat than folks of any other sexual orientation. We may be monogamous. We may be bi or poly-amorous. Simply put, our sexuality does not automatically make us ‘cheaters’. The thing that is often missed when folks seem convinced we will cheat is that we not attracted to everyone. We have standards and even though we have the ability (I would call it a superpower) to be attracted to folks of multiple genders it does not mean that everyone is attractive to us. 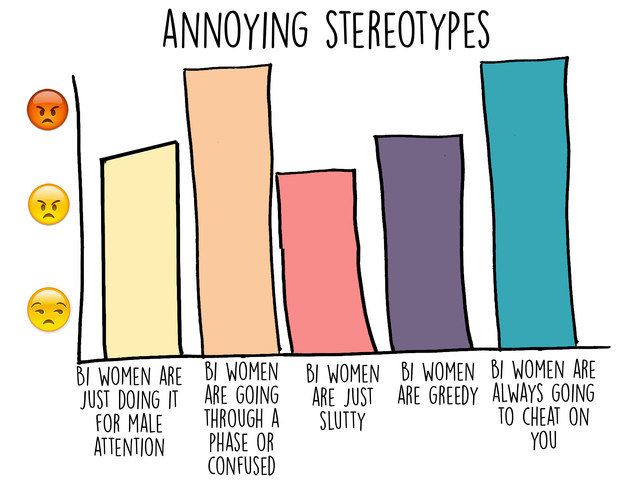